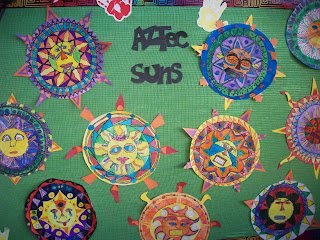 Fifth graders recently studied the Aztec Sun Stone in Art class. The Aztecs lived in Mexico from around 1300-1500 AD. They worshipped the sun because it provided life to all people. They carved a huge stone disk, three feet thick and almost twelve feet in diameter that is now known as the Sun Stone or the Aztec Calendar. When the Conquistadores arrives, it was buried after no one was able to destroy it. In 1760 it was found buried in Mexico City and is now in the Museum of Anthropology in Mexico City.

The Stone shows how the Aztecs believed the world went through four creations and destructions. They used glyphs, or picture symbols, to communicate meaning. It is a complex and fascinating calendar system with the face of the sun in the center of the radial design.

Fifth graders were able to create their own radially symmetrical design using gylphs. They began with pencil and repeated shapes around the circle and creating an interesting sun face. They added paint and marker, finishing their projects with cut pieces of construction paper!
Posted by Elementary Art Room on Sunday, November 08, 2009 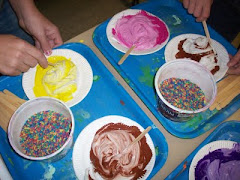 Elementary Art Room
I have been an elementary art teacher for eight years at a school in Southeast Michigan. I was also an art teacher at our local art museum, where I learned the best practices from so many wonderful art teachers. Before I arrived at my elementary school, the district had never had elementary art! I love filling that halls with the work my students so proudly create. I get lost in other blogs like Deep Space Sparkle and Painted Paper, so I decided to share some of my own ideas here!